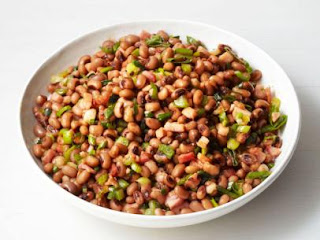 Actually, variations of this New Year’s dish can be traced back to the era of the Babylonian Talmud and North Africa where versions of the meal were eaten in celebration of Rosh Hashanah (the Jewish New Year), but let’s face it, hoppin’ Johns and collards have become synonymous with southern cuisine and tradition.
Legend (or myth) has it that when Sherman’s Union Army came through the south during the Civil War, they destroyed much of the crops except for the black-eyed pea fields which were thought by Union soldiers only to be suitable for animals, thus saving southerners from starvation. They are also said to represent coins. Currently, most people do use black eyed peas for their hoppin’ Johns recipes; however, for many true southerners (myself included) field peas or cowpeas (red in color) are used. This is said to be due to African and Caribbean influences in the south. Whatever your choice of pea, hoppin’ Johns are always served mixed with rice, diced onions and pork.
Greens in any form whether it be mustard, turnip, cabbage, etc. are said to represent currency due to their flat, green appearance; however, collard greens are the most popular for New Year’s Day meals in the south (and they are especially good with a little hot pepper vinegar poured on top!). Eating greens on New Year’s Day is said bring prosperity for the coming year.
Pork in various forms is used for preparing both hoppin’ Johns and to season the greens. Some use bacon, others prefer ham, ham hock or fat back. Historically, owning pigs and livestock was a sign of prosperity and wealth, so again, eaten in hopes of an abundant year ahead.
Additionally, corn bread is often eaten with this dish and is said to symbolize gold. Plus, it’s really good for soaking up the good “pot likker” or as my grandmother would say, “pot likkah” from the greens. At one time, wheat was rare in the south, so southerners made corn bread a mealtime staple.
For my mother and grandmother and many other southerners, preparing hoppin’ Johns and collards was an all-day event; however, today there are canned hoppin’ Johns you can heat up and mix with rice as well as canned collards that taste almost as good as grandma’s! If you want to try your hand at making your own version of this dish, there are many recipe variations available online from the simple to complex. Whether you choose to make yours from scratch, get them in a restaurant, or out of a can, don’t miss this opportunity to eat your way into a prosperous New Year!
Christi Wickliffe-Bessinger
Advertising & Marketing Manager
Garden City Realty, Inc.