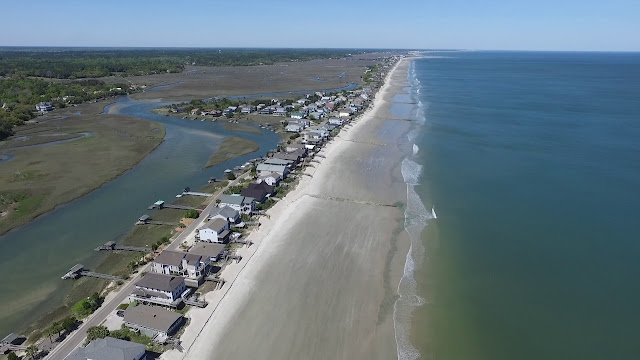 Pawleys Island, South Carolina is one of many historically rich sites on our long coast. Although the exact founding is not certain, it is believed to be named after Percival Pawley and his three sons: George, Anthony, and Percival Jr. In 1711, Percival was the first European to begin developing plantations on the Waccamaw Neck. During the Civil War, most property records were lost, leaving the beginning development kind of a mystery.
But this isn’t the only mystery that surrounds Pawleys Island. One of the most popular, is “the Gray Man,” a cloaked, ghostly figure who stands on the coast right before severe storms blow through. Even though this may sound spooky, many locals agree that the Gray Man saves lives. He stands as a warning for danger to come—and was even spotted during hurricane Florence in 2018. With one more month of hurricane season, he may come out again.
Another local story is of Alice Flagg, a 16-year-old girl who lived on “The Hermitage,” a large rice plantation, with her brother Dr. Allard Flagg. Alice often went into town to run errands and one day she met a young man who she fell in love with. While the two were dating, the man came by the plantation. Allard found his social status to be far too low for Alice and sent him away. Alice and the man began meeting in secret and they soon became engaged. Alice tied her ring around her neck with a string to conceal this, but when Allard found out, he shipped Alice off to boarding school. She eventually fell ill with malaria and died. Dr. Flagg discovered the ring and threw it into the marsh, and she was buried without it. Her tombstone is a simple marble slab with only “Alice” engraved into it. Late at night, visitors have seen Alice wandering around the All Saints Cemetery in a white dress. Some say, if you circle the grave 13 times and place a coin, she will show herself. Others believe she will appear only to true lovers who offer a flower or ring on her headstone.

–  By Olivia Dimatteo, a blog contributor for Garden City Realty