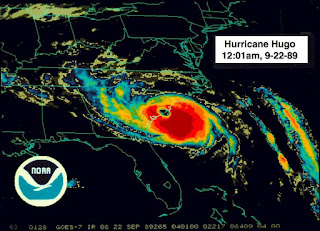 In 1987, my mother and I were living in an oceanfront condo in Garden City Beach. When I finished school that year, my mother decided to return to her hometown (Hampton, SC) to renovate her grandparent’s home. Just two years later, the very place we had called home for many years was ravaged by the historic force of nature known as Hurricane Hugo. 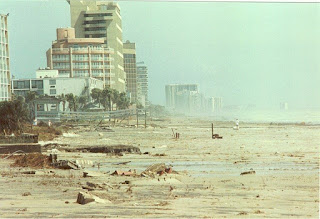 Hampton is located about an hour and a half south of Charleston. It also sits just east of Savannah, GA and just north of Beaufort and Hilton Head Island. Early in its forecast, Hugo was said to possibly be on track to hit the Beaufort area which would have been disastrous for our Hampton. My grandfather told harrowing stories about Hurricane Gracie which hit Beaufort in the fifties. The damage from that storm made it to Hampton. Hugo; however, continued up the coast sparing our area from major damage.
Hugo made landfall just after midnight on September 22, 1989, I remained wide awake in my mother’s bed listening as branches cracked and crashed, rain poured on the tin roof and the glass in our 97-year-old windows rattled and shook all night. The next day, there were downed power lines, uprooted ancient oak trees, and debris scattered about, but for our neighbors to the north, it was far worse.

In the days after Hugo made landfall I remained glued to the television watching legendary meteorologist, Charlie Hall, on Charleston’s Live 5 News. He was broadcasting from a remote, makeshift, non-air conditioned studio somewhere near Awendaw as channel 5’s studios had been heavily damaged. While most media attention focused on Charleston (landfall was just north of the city in McClellanville), I watched for any news about my beloved Grand Strand home.

If you have ever lived in Garden City Beach you know that a full moon or a nor’easter can cause major flooding and erosion, so imagine a 13-foot storm surge. Even though the Grand Strand area didn’t receive the brunt of the storm, it was on the north eastern side which is typically not a good place to be. The area received 75+ mph winds and a heavy storm surge resulting in high levels of damage along the 60-mile stretch of coast known as the Grand Strand. As the aerial footage began to come in, I watched in disbelief and tears.

As in most cases of major disasters in our country and especially in South Carolina, this disaster while devastating, truly brought out the best in people. Neighbors helping neighbors, other South Carolinians donating money, water, clothing, cleaning supplies, etc. to the coast, and then there was the leadership of people like Charleston Mayor Joe Riley who worked tirelessly with others to get his city back in working order. South Carolina’s resilience and strength truly became apparent to the rest of the country in the days after Hugo.

Just four years after Hugo, I moved back to the Grand Strand. Even then reminders of Hugo could still be seen in my trips up and down US 17. The snapped trees of the Francis Marion National Forest and the old fishing boat which remained for many years in the median of US17 somewhere near Awendaw were subtle reminders that Hugo had been there.

With 160 mph winds and storm surges up to 20 feet, Hugo was the costliest and most damaging hurricane recorded in United States history until Andrew in 1992 (Florida).  In South Carolina alone Hugo did 6.5 billion dollars in damage (16.6 billion by today’s standards), took the lives of 35 South Carolinians, made 60,000 homeless, and left 270,000 residents temporarily unemployed. Due to the extensive destruction of this storm the name Hugo was retired never to be used again in naming an Atlantic storm. In the 27 years since, thankfully we have not experienced a storm like Hugo in our area. Hopefully, we never will. There is always that risk, though. I guess some would say it’s the price we pay to live in such a magnificent and beautiful place.
Christi Wickliffe-Bessinger
Advertising & Marketing Manager
Garden City Realty, Inc.